This species has large, bright red eyes with vertically narrowed pupils. The red eyed tree frog is very colorful, with a vibrant green body, yellow and blue vertical stripes along its side, a white underside, and brightly colored orange or red feet. Additionally, they have sticky pads on their toes that allow them to cling onto leaves . The skin on the red eyed treefrog's belly is soft and fragile, whereas the back is thicker and rougher. On average, the males are about two inches long, and the females are slightly bigger at around 3 inches.

Red eyed tree frogs inhabit areas near rivers and ponds in rainforests and humid lowlands on the Atlantic slopes from southern Veracruz and northern Oaxaca in Mexico, to central Panama and northern Colombia. They also live on the Pacific slope in southwestern Nicaragua and southwestern Costa Rica to eastern Panama. The optimum temperature for red-eyed treefrogs is 24–29 °C (75–84 °F) in the daytime, and 19–25 °C (66–77 °F) at night. Agalychnis callidryas also require high humidity levels of at least 80%. 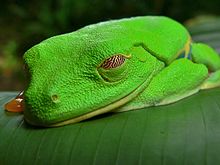 Phyllomedusine treefrogs are arboreal, meaning they spend a majority of their lives in trees; they are excellent jumpers. Despite their bright coloring, red-eyed treefrogs are actually not poisonous, and rely on camouflage to protect themselves. They are nocturnal, sleeping for most of the day. In order to hide from predators, they cover their blue sides with their back legs, tuck their bright feet under their bellies, and shut their red eyes. Thus, they appear almost completely green, and well hidden among the foliage. They do not have a true eyelid, but rather a Nictitating membrane that allows light to enter the eye so that they will awaken when predators are approaching. Their large red eyes not only aid in their ability to see at night, but also serve as a defensive adaptation through deimatic behaviour. When a red-eyed treefrog detects an approaching predator, it abruptly opens its eyes and stares at the predator. The sudden appearance of the red eyes may startle the predator, giving the frog a chance to flee.